Wow, it really has been a long time since I’ve posted! I am so sorry! I should be grounded and sent to my room; my son says that’s not really punishment, though. I have a TV, DVD player, and plenty of movies in there, and I can always sneak the WiiU in there to keep myself entertained!

Actually, things have been a little crazy in my house for the last eight, nine months. My only child moved to Missouri in November, taking a big piece of my heart with him. I’ve had a rough time of it, as I’m sure all parents who are suddenly empty nesters will understand (granted, I still have the other child, aka my husband, but it’s not the same thing!). I did a little writing, but the motivation just wasn’t there because my son was gone.

However, thanks to Bente Gallagher, who graciously shared one of her story ideas with me, Jamie Livingston-Dierks, Stacy Jeziorowski, Kristi Spinks, my parents and my son, I finally started working on a brand new story. It’s in the final editing stages as I type this (speed it up, Stacy!), and we are planning to release the story August 5th.

So, what kind of story is it? For starters, it’s what you’ve all been asking for: it’s a full-length novel! No, really! As of right now, it’s 313 pages, almost 90,000 words. I’m just as surprised and thrilled as you are! I didn’t think I had it in me, but once I got into the story, it just flowed. 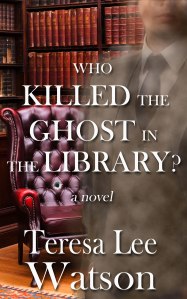 It’s not a Lizzie story, however. Like I said, this is a brand new series, and the first book is Who Killed the Ghost in the Library? It stars a ghost writer named Cam Shaw, who ghost writes stories for other people (sorry, due to those pesky confidential and non-disclosure agreements, we’re not allowed to tell you who she’s worked with). However, her newest client believes she actually helps ghosts write their stories, because, well…he’s a ghost. Stanley Ashton III was murdered in the mid-1940s in his own house, and he’s been stuck there ever since. After seeing Cam’s ad in the newspaper, he hires her to find out who killed him. But someone doesn’t want the story to come out. Bodies start dropping like flies, someone tries to kill a former police chief, who is the grandfather of the current police chief, Mike Penhall. Mike thinks that Cam needs to butt out of his investigation, until he meets Stanley. So who killed the ghost, and who doesn’t want the truth to come out?

I promise there are plenty of explosions, excitement, shootouts, and chemistry, especially between Cam and Mike. Keep checking here and my author page on Facebook for excerpts and more details as it gets closer to the release date. I’m very excited about this book, and I know you all are going to LOVE it!

It’s Going to be a Busy Year!

Yes, there will be a second book! Who Killed the Ghost Writer? Cam is contacted by the ghost of a fellow ghost writer, who was killed because of a book they were writing. But Cam doesn’t know who her friend’s client is, because the manuscript has disappeared!

I’m sure you are wondering about poor Lizzie. Don’t worry! I haven’t forgotten about her. I have a couple of plot ideas I’m bouncing around for her: Death Drives a Zamboni and Death Shoots the Sheriff. I’m not sure which one is going to be first, but I’m hoping to have a new Lizzie story by the end of the year. Catch up on all of the Lizzie’s adventures in the meantime!

Thank you all for being so patient! I promise it was all worth it! The new story is fantastic! Stay tuned!