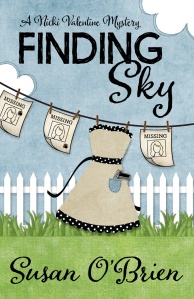 Nicki Valentine’s best friend, Kenna, and her husband Andy, are excitedly preparing for the sound of little feet at their home. After years of trying to have a baby on their own, they’ve turned to an adoption agency, and are matched with Beth, a young teenage girl who wants to give her baby up for adoption. Everything is going well, until Beth suddenly disappears a couple of weeks before her due date.

Nicki, a young widow with two small children, has been taking classes to become a private investigator. When Kenna asks Nicki to help her find Beth, Nicki is hesitant. But after listening to her best friend, she realizes that Kenna is truly worried (Nicki is the worrywart between the two friends), and that sets off warning bells for Nicki.

After meeting with her P.I. instructor, Dean, who makes all sorts of bells and whistles go off for Nicki (in a good way), she starts looking into Beth’s life. Beth’s ex-boyfriend, Marcus, is a gang member who didn’t want to have anything to do with Beth after he found out she was pregnant. Nicki tracks him down, and stakes out his house, hoping he will lead her to Beth. But things take an unexpected turn when Marcus is shot, and Nicki is forced to step in to save his life.

More digging leads to Beth’s best friend, April, who is struggling with a secret of her own, a secret she told Beth the night she disappeared. April blames herself for Beth’s disappearance, believing her secret drove her best friend away. Nicki also learns that Beth had run away a couple of times before, and she can’t help but wonder if Beth has simply run away again, this time because she has changed her mind about the adoption. Not something that Nicki wants to tell her hopeful best friend.

When someone takes a shot at Nicki while she is sitting in her van one night, she realizes that things have taken a very dangerous turn, one that could get her children hurt. A threatening note is found on her computer after her house is broken into, and then a member of a rival gang tries to take Nicki’s youngest daughter. Things have now gotten personal, and Nicki is angry, which makes her more bounded and determined to find out what happen to Beth before it is too late. But will Nicki and Beth make it out alive?

Finding Sky is a wonderful debut novel from Susan O’Brien. As a private investigator, O’Brien is able to provide more depth and knowledge to Nicki’s character, making her more believable. I absolutely love the characters, and the vivid descriptions she paints throughout the book makes me want to take another trip to the East Coast. I truly felt like I was in the van with Nicki as she drove across two states, driving through the nice neighborhoods of Nicki and Kenna, to the rough and dangerous neighborhood of Marcus’ world. And I was holding my breath as the story raced to a dangerous, exciting conclusion. I look forward to reading her next book (I just wish it was sooner than next September!). Well done, Susan!

Pick up Finding Sky on these sites:

This mystery is also available on iBooks.

It’s Promote an Author Tuesday!  Meet Susan O’Brien, who released her debut Finding Sky on Amazon today! Stop back over on Thursday for my review of this Nicki Valentine Mystery.

Suburban widow and P.I. in training Nicki Valentine can barely keep track of her two kids, never mind anyone else. But when her best friend’s adoption plan is jeopardized by the young birth mother’s disappearance, Nicki is persuaded to help. Nearly everyone else believes the teenager ran away, but Nicki trusts her BFF’s judgment, and the feeling is mutual. The case leads where few moms go (teen parties, gang shootings) and places they can’t avoid (preschool parties, OB-GYNs’ offices). Nicki has everything to lose and much to gain — including the attention of her unnervingly hot P.I. instructor. Thankfully, Nicki is armed with her pesky conscience, occasional babysitters, a fully stocked minivan, and nature’s best defense system: women’s intuition. 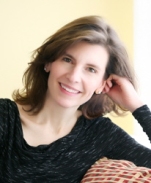 Susan O’Brien has been passionate about reading and writing since childhood, when she started a neighborhood newspaper and escaped tween stress with mysteries. Since covering her first big story (the birth of gerbils next door), she has worked with USA TODAY, PI Magazine, The Parent Institute and others. Susan has an M.A. in forensic psychology and is a registered private investigator in Virginia. Among her diverse interests are photography, gardening, loud R&B music, healing prayer and reality TV. She lives with her husband and children in the D.C. suburbs and donates part of her earnings to missing children’s organizations.