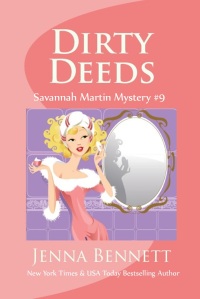 Now happily settled in their home, Savannah Martin and Rafe Collier are looking forward to planning their wedding while they start decorating a nursery for the baby they are expecting. Savannah decided to sublet her apartment for a couple of months for extra cash until her lease runs out, and so far it has worked out well. Until she goes to the apartment to clean it before the next arrival, and finds a dead woman, who eerily looks a lot like her, in her bed.

The investigation is being handled by their old friend, Detective Tamara Grimaldi, so Rafe won’t have to investigate this time. While he’s busy at the TBI, Savannah is cleaning out her office, having just been fired. Liz, the new hire (probably there to take Savannah’s place, she thinks), tells her that her sister came by on Saturday looking for her. But when she checks with her sister, Savannah finds out that her sister wasn’t in Nashville that day, but someone else she knows was…her ex-boyfriend, Todd Satterfield. And the “sister” that showed up at her office sent him a message using her computer, asking her to come to Savannah’s apartment. And they signed Savannah’s name to it.

Grimaldi sends Rafe down to Sweetwater to talk to Todd, who lawyers up, and he drives to Dix’s office (Savannah’s brother). But he doesn’t give much information to Rafe, making himself look very guilty. When Todd’s connection to the dead woman is uncovered, Rafe is forced to go to Atlanta to find out what happened during the time that Todd lived there. So Savannah goes home to Sweetwater, where her mother is still holding out hope that she’ll dump Rafe and marry Todd.

However, Savannah’s main concern is to keep Todd from being railroaded. But he doesn’t say much to her that will help his case. During a visit to the Bog, she meets Ronnie Burke, the owner of the construction company who is turning the Bog into a community of homes. The next day, she also meets his mother, Frances, who lets Savannah know exactly how she feels about the way Savannah has been behaving, and how disappointing her relationship with Rafe, Sweetwater’s bad boy, is to everyone who knows her. Unable to control herself, she tells Frances and her mother what her plans are for her own wedding and her future. (Yay Savannah!)

Between Rafe’s investigation in Atlanta, Grimaldi’s investigation in Nashville, and Savannah’s…non-investigation (after all, she promised Rafe she wouldn’t stick her nose in his investigation), the pieces slowly start to come together. Savannah heads home to Nashville, confident that, for once, she’s not the one in harm’s way. But when she gets home, she realizes that the danger is coming from someone they never suspected…and they are closer to Savannah than anyone realizes.

I’ve been waiting very patiently (ok, maybe not THAT patiently) for the next installment in this wonderful series to come out, and I am happy to say that the wait was worth it. I think my favorite scenes (besides the descriptions of Rafe without various pieces of clothes on) were the ones between Savannah and her mother. It’s wonderful to see how much Savannah has grown and become more of her own person. The speeches she makes to Frances and her mother, and then later, the one at her mother’s house, were things I’ve been waiting for her to say for the last two or three books, and Jenna did not disappoint. She did a wonderful job writing these powerful, “I am me, I love this man, get over it” speeches for Savannah. I was laughing and cheering at the same time (my husband thought I had lost my mind) as I read them. As for whodunit, I figured out one part, but the rest of it had me guessing until the very end. Again, it was well worth the wait. A worthy addition to this delightful, awesome series. And now, I have to start patiently waiting for number ten…is it done yet?

Get your copy of Dirty Deeds: