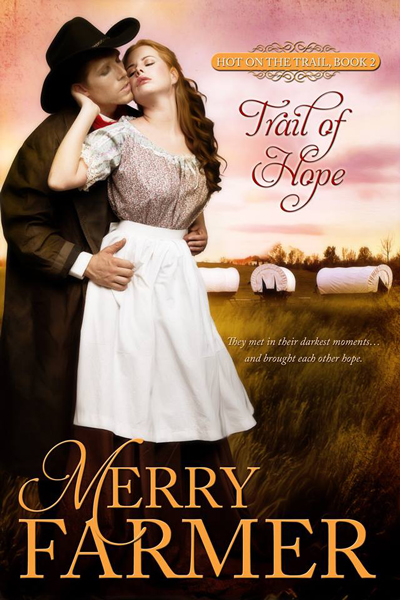 About TRAIL OF HOPE:

Callie Lewis is alone on the Oregon Trail. After her brother’s death, she has been left to fend for herself on a journey she never wanted to take. Her only hope for safety and a life at the end of the road is to become a trail bride and wed grieving widower John Rye. But John is harboring secrets that could end their hasty marriage before it has a chance to begin.

When a vicious tornado wakes John from the stupor the death of his wife left him in, he is ready to embrace Callie and the new life they could have together. But John is not the only one with designs on his new wife. Miles away from civilization, in a wagon train bristling with secrets and suspicion, John must catch a thief, fend off his rival, and reclaim his life to build the future Callie deserves.

In their darkest moments will they bring each other hope or misery?

Add Trail of Hope to your Goodreads “Want to Read” list: http://smarturl.it/TrailofHopeGoodreads