As I sit writing the next installment in the Lizzie Crenshaw Mysteries, I couldn’t help but think about Mittens. Many of you know Mittens as the dog Lizzie adopts following the murder of her caretaker, but many of you don’t know that Mittens is based on my own dog.

That’s why I’ve decided to repost this blog from a few years ago. Those of you who have read Death Takes the Blue Ribbon, part of the Unlucky 7 collection, will see where the inspiration for the cheesecake scene originated! 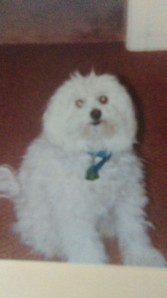 Don’t let the name “Mittens” fool you: when we named her, I was thinking she was white with black paws or black with white paws. Nope, she was a round, fluffy ball of white fur. We got her in the spring of 1977 while we were living in Artesia, New Mexico, and she was a wonderful addition to our family of four. Poor Dad – outnumbered by women! (You should have heard the yelling over the phone when I told him he was having a grandson! Oy! But that is a story for another day.) What kind of dog was she, you ask? After all these years, I don’t think we have ever decided what she was. She was a little bit of this, a little bit of that, wrapped in a medium size bundle of energy, sloppy kisses and lots of love.

She spent her nights in the bathroom; so did Mother. Mittens whimpered and whined because she was all alone in there, so Mother would go in and hold her to calm her down. She fell asleep several times in the bathroom with Mittens in her arms, so naturally Mittens was Mother’s dog from the beginning. I wish I could find the picture Dad took of Mittens in the backyard: he put her inside this little red bucket and stepped across the yard to take a picture. All you see is this little white head peeking over the top of the bucket.

Everyone always says that their dogs are unique, and I am no different. The most unique thing about Mittens was her tail. She didn’t wag it from side to side; it went round and round like a helicopter blade. I often wondered, when I watched that tail spin, what would happen if she took flight. Wouldn’t that have been a sight to see!

One mistake Mother and Dad made was putting her doghouse on the other side of their bedroom window. They often said there was nothing like waking up to see a furry face staring at you in the window from the roof of her doghouse. But she didn’t always sleep outside. In fact, I think she only slept outside that first year. Most of my memories are of her sleeping on their bed every night. Sunday afternoons after church was (and still is) nap time. All you had to say was “nap”, and Mittens was on the bed before they were even in the bedroom. I should clarify something: she didn’t just sleep “on” the bed. Nine times out of ten, she was UNDER the covers, not on top of them. No, she wasn’t spoiled at ALL.

That first winter, she disappeared one day from the backyard. Now, the fence looked like the in and out weaving of a straw basket, and she wasn’t full grown at that time. We looked everywhere for her until we got a call from our minister and good friend who lived down the alley from us. “Are you missing your dog?” he asked us. We said yes, and he told us that Mittens was at their house visiting their cocker spaniel, Angel.  But we could not figure out how she got out. One day, Dad happened to look out back and saw her climbing the basket-weaved fence. He couldn’t believe what he was seeing, but it was true. She was a sneaky one.

Since Dad is a minister, we moved a lot, but these moves never phased Mittens. She loved to ride in the car, usually in Dad’s lap, with one paw on the driver’s door. She always sat up front with them, rarely in the back with my sister and I. She preferred the view from the front.

Did I mention she was sneaky? Once Dad finished seminary, we moved back to New Mexico, to a little town called Jal. Our house was located right next to the church. There was a chain link fence with a nice sized yard for Mittens to run around. But she had the tendency to dig under the fence and get out. Apparently she couldn’t climb chain link. One Sunday, Dad was leading the evening service when he got a funny look on his face. I looked up the aisle, and there was Mittens, crawling on her belly, covered in mud from the rain we had earlier. Guess who got elected to carry her home? Guess who was wearing white pants at the time?

We moved forty miles up the road to Hobbs two years later. She was spoiled rotten by the people at Grandy’s restaurant. Whenever we went there, they always sent home chicken livers for her. She loved popcorn and grapes. But giving her jello was a funny sight to see. She would pick it up, flop it around inside her mouth, spit it out and look at us as if to say: “Are you kidding me? This stuff is gross!” The funniest memory I have of her involving food was the day of my high school graduation. Mother was making my favorite dessert, which has a pecan crust. She put it on the floor by the back door, hoping it would cool faster. A few minutes later, we heard “clink clink clink”, and discovered that Mittens had eaten half of the crust, had two paws in the dish and was polishing off the other half. We still laugh about that one.

We had a long foyer at the house in Hobbs that was linoleum. Mittens loved to chase tennis balls, and Dad would throw them toward that foyer almost every time. You could hear her toenails clicking on the floor, usually followed by a thud, which meant she had chased the ball to the door and slid right into it. It never phased her. She came running back with that ball, gave it to him, ready to go again. But she also loved to spend time sitting on the couch or in the recliner with us. She was a great snuggler.

I graduated from high school in 1986, and went my own way, so I didn’t get to see her as often as I would have liked. The rest of the family moved to El Paso in 1988, but by this time, Mittens was beginning to show her age. She was content to sit on her favorite blanket in a chair. I got married in the fall of 1990. Two months later, while my parents were on vacation in Colorado, and with my sister home with her, Mittens’ health took a turn for the worse. My sister took her to the vet, where they put Mittens to sleep. We buried her ashes in my grandmother’s home in Artesia, fifteen years after she first came into our hearts and our lives. We look back on those years with her with plenty of laughter. She will always be Mittens the Wonder Dog with the helicopter tail, climbing fences, chasing tennis balls and giving us all the love we could ever want.