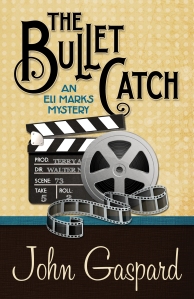 Eli Marks is working in Uncle Harry’s magic shop when his old high school friend, Jake North, shows up in disguise. He’s in town to shoot scenes for his new movie about Terry Alexander, aka the Cloaked Conjurer. Alexander revealed the secrets to magicians’ tricks, which broke the cardinal rule of magic: never reveal how the trick is done. Unfortunately for Alexander, doing this ruined his career. He died doing a trick called “The Bullet Catch”. It’s the last scene scheduled to be filled, and Jake is afraid it may be the last scene he ever films.

Their fifteen-year high school reunion is taking place while he is in town, and while they are there, they run Trish, who was the most popular girl in school back then. She’s married to Dylan Lasalle, the most likely to be arrested, how the heck did he graduate bad boy of their class. Dylan spends the evening ignoring his wife; instead, he spends the evening flirty with the women and getting drunk. Their last view of him that night is being driven away by Trish. The next morning, he’s dead.

The police think it might be a mugging, but Eli has no intention of getting involved in another case. So he visits the movie set, where he learns that Hollywood relationships have a shorter expiration date than a gallon of milk. No wonder Jake is worried. Having the star of the picture die while filming the final scene would guarantee a box office hit.

While Eli is worried about his friend, he’s asked to perform magic tricks at a private party. But when he gets there, this must be a seriously private party, because there are no cars anywhere. Instead, he an older gentleman named Mr. Lime, who wants to know what the police said to him about Dylan’s death. Mr. Lime is a bit of an odd duck, who loves to quote old movies, like Casablanca, Double Indemnity, and Laura, with an odd reference to Francis the Mule.

The bodies continue to fall, Mr. Lime makes another creepy appearance with more movie references, and Eli becomes concerned that Trish may be next. But he’s also trying to figure out how to make sure Jake survives the final scene of the movie, the dreaded Bullet Catch.

Will Eli be able to use enough sleight of hand tricks to save Jake, and figure out who the killer is? Or will someone be doing The Broken Wand at his funeral?

The Bullet Catch is a delightfully wonderful book. I particularly like seeing a main character with flaws, in Eli’s case, his fear of heights. As I read those particular scenes, I could feel his fear, and at times, I felt my own heart racing for him. The First Thursday scene had me laughing out loud (good thing I was home alone at the time!). Gaspard wrote a fantastic book. The plot was intricate and detailed, and as a fan of the Golden Age of Hollywood, I loved all the references to the old movies. The plots of these movies are woven seamlessly into the mystery at the heart of the book, and I found myself stopping to remember the plots of these old movies, and trying to figure out how it related to the present mystery. I highly recommend The Bullet Catch, and I look forward to Eli’s next adventure. Now, if you’ll excuse me, I’m feeling a bit nostalgic. I’m off to Rick’s Place.

Bullet Catch is available for purchase on Amazon. For additional ways to purchase this book, visit the Henery Press website. Pick it up today!