Today, we’ll take a look back at the history behind M.C.V. Egan’s The Bridge of Deaths.

The war has hit Poland, with the 10th and 14th German armies crossing the Vistula River, eventually breaking through the Polish lines. As they advance, German troops encounter hundreds of massacred German residents of Polish cities, atrocities which were committed by the fleeing Polish troops. German troops continue to advance and, upon entering Piotrkow, set fire to the Jewish district.

Despite what appears to be a rapidly-escalating conflict, President Roosevelt steadfastly maintains the United States’ neutrality. 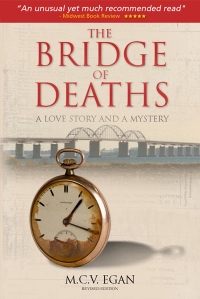 A link to The Bridge of Deaths: The vast majority of Americans did not want anything to do with the European conflict. There were, however, propaganda movements to encourage Americans to think differently, the most powerful of which is found at the British Security Coordination (BSC). The BSC, interestingly, was housed in 30 Rockefeller Plaza in New York City, the same building as Standard Oil, the company where G-AESY victims Samuel Simonton and C.A. Castillo (the author’s grandfather), worked. Among the spies coming out of the BSC were people who left great names in other fields after the war, amongst them authors Roald Dahl and Ian Fleming. (Source) In The Bridge of Deaths, the protagonists explore how, in 1939, individuals with an ability to travel were recruited as spies for the British government.

ABOUT THE BRIDGE OF DEATHS

“M.C.V. Egan twists truth and fiction until you question your perceptions…it is a story of real love, triumph and search for self.” – Beckah Boyd @ The Truthful Tarot

5 out of 5 stars:  “An unusual yet much recommended read.” – Midwest Book Review

On August 15th, 1939, an English passenger plane from British Airways Ltd. crashed in Danish waters between the towns of Nykøbing Falster and Vordingborg. There were five casualties reported and one survivor. Just two weeks before, Hitler invaded Poland.

With the world at the brink of war, the manner in which this incident was investigated left much open to doubt. The jurisdiction battle between the two towns and the newly formed Danish secret police created an atmosphere of intrigue and distrust.

The Bridge of Deaths is a love story and a mystery. Fictional characters travel through the world of past life regressions and information acquired from psychics as well as archives and historical sources to solve “one of those mysteries that never get solved.” Based on true events and real people, The Bridge of Deaths is the culmination of 18 years of sifting through conventional and unconventional sources in Denmark, England, Mexico and the United States. The story finds a way to help the reader feel that s/he is also sifting through data and forming their own conclusions.

Cross The Bridge of Deaths into 1939, and dive into cold Danish waters to uncover the secrets of the G-AESY.

Get the revised 75th anniversary of The Bridge of Deaths on Amazon in eBook and paperback.

Don’t forget to stop back again on Thursday to check out my review of The Bridge of Deaths. Until then, click here to enter to win a $75 Amazon Gift Card!